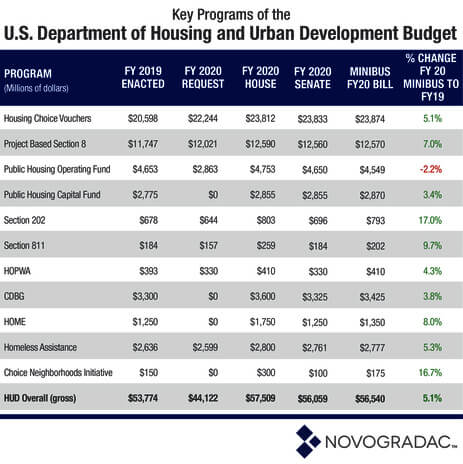 Excerpts from blog published by Peter Lawrence on Wednesday, December 18, 2019

On Dec. 17, the House passed H.R. 1865 and H.R. 1158, the two comprehensive fiscal year (FY) 2020 spending bills covering $1.3 trillion in funding for all federal agencies, including Treasury and the U.S. Department of Housing and Urban Development (HUD), averting a potential federal government shutdown that would have begun after the temporary stop-gap funding bill, the Continuing Resolution (CR) was scheduled to expire on Dec. 20. The Senate is expected to pass both FY 2020 spending bills soon and the president is expected to sign the legislation before the CR expires at the end of the week.

This overall funding allocation was made possible by the Bipartisan Budget Act of 2019 (BBA19), which set a cap of $622 billion for FY 2020 non defense spending, which is $25 billion (4.2 percent) more than the FY 2019 cap, but $79 billion (14.5 percent) more than the FY 2020 non defense cap prior to the BBA19. As noted above, this budget agreement was finalized after the House set its FY 2020 spending allocations for each bill, so it was not surprising that the final program funding levels were closer to the Senate bill rather than the House bill.

The final bill does not agree to eliminate the Choice Neighborhoods Initiative, which is designed to comprehensively revitalize high-poverty public and assisted housing communities, as proposed by the administration’s request. Instead, the bill provides $175 million, $25 million (16.7 percent) more than FY2019, $75 million (75 percent) more than the Senate bill, but $125 million (41.7 percent) less than the House bill.

That being said, House Ways and Means Committee Chairman Richard Neal, D-Mass., has expressed his intent to consider comprehensive infrastructure legislation in 2020, which could provide an opportunity to advance affordable housing and community development-related tax incentives, including a new federal infrastructure tax credit, permanence for the NMTC, and many, if not all, AHCIA provisions, through the House floor and represent the opening bid for such legislation in early 2021, when it likely would have a better chance at enactment in the first term of a new Democratic president or second term of a newly re-elected president Trump.

Is it Time to Change the Federal Budget Process for Affordable Senior Housing?

You can make the difference.